Wylie didn't start her show career until she was 9 months old, and it took many shows before she got her act "somewhat" together.  Still, she took points, at her first show, over quite a large Open bitch class, and she honestly never stacked or put all 4 feet on the ground at one time.  When taking the photo with the judge, I told her I was suprised, and she said "regardless of her antics, she was far and away the best bitch that day".  We suffered through 5-6 more shows, but she was getting better, and finally showed reasonably well at the Michigan National.  Well maybe more then "reasonable".  She was 4th in her Sweeps class, and finished 2nd in the 12-18 class with 47 bitches.  She was only 3 weeks over a year.  A British judge was visiting, and told me he thought she was the best moving dog he has seen so far at that National.  She went on to finish with Specialty majors, and a Best of Breed from the classes over top Specials.  She learned and got better, but we only have one or two good photos of her.....she never developed into that "tried and true show dog."  Still her personality is delightful, and a friend to all.  She is a delight.  One thing to note, Wylie has taken most of her wins under breeder judges who appreciate her structure and movement.
Another note about her name.  Yes we named her Wylie, but when the time came to give her a formal name for the show ring, I was at a loss, so just put a "K" in front (it was my "K" litter).  Did I regret this decision in hindsight?  You bet....big time.  Oh well, it's the dog, not the name!! 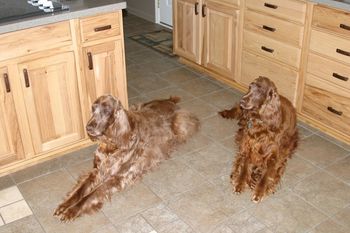 Such pretty and contented dogs. That's what's it's all about. 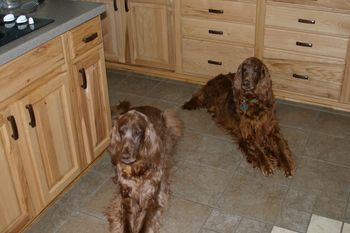 What more can we say. 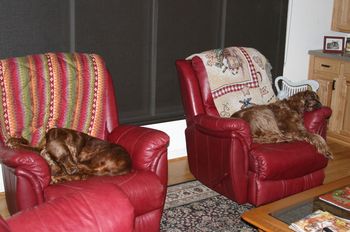 Wylie is now living in her new home in Nebraska with the Demuth family. Best of all she is reunited with Sam, Ch. Tramore Headline News. 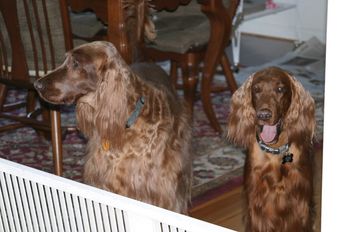 Wylie and Sam looking so nice. 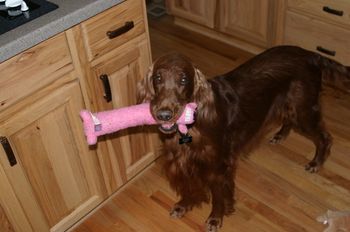 What more can we say!! 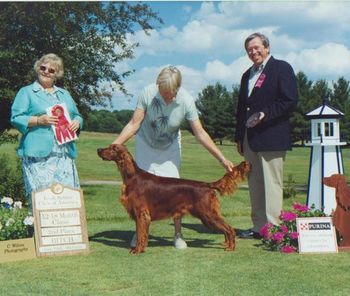 Wylie shown going second in a 47 bitch 12-18 month class at the Michigan National. It was quite a thrill. We had one gentleman from England congratulate us, saying she was the best moving dog he had seen so far at that National. High Five! 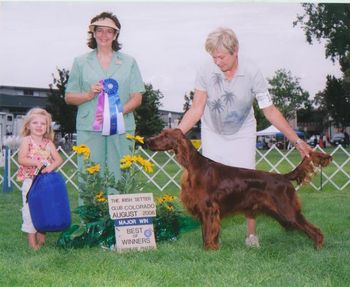 Wylie taking a Specialty major at the Irish Setter Club of Colorado. Our granddaughter, Sofie, is holding the trophy. She absolutely loves dog, and playing "show dog". Chip off the "old" block!! 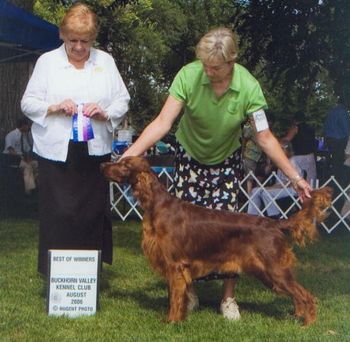 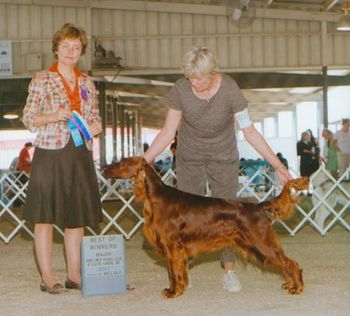 Finishing her Championship at the Kansas Specialty weekend. Wylie gets really hot, and puffs her cheeks something awful.